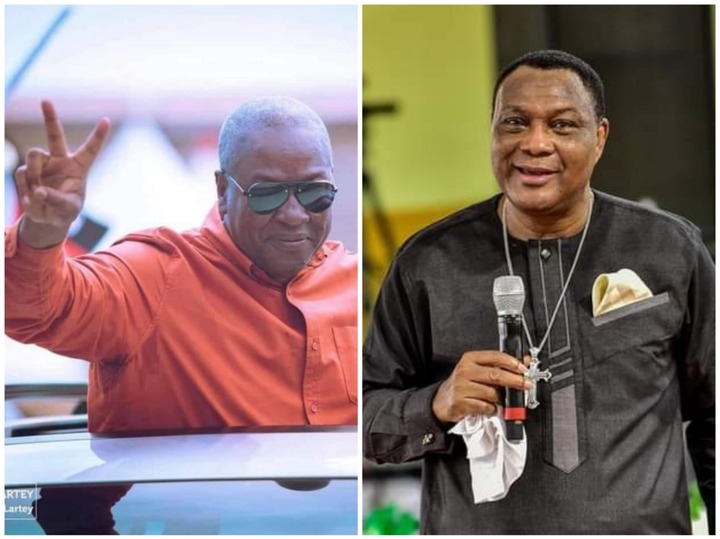 The Founder and Leader of Royal House Chapel, Apostle General Sam Korankye Ankrah has admonished the former President John Dramani Mahama to be receptive to whatever outcome the election presents, come December 7. Though he wished John Mahama and the National Democratic Congress (NDC) wins, he stressed on the importance and the greater reward for them to prepare for what the people chooses, as well as the will of God.

The NDC had come to his church for a Thanksgiving service after a three day national fasting, in a quest for political victory. As a godfather for John Dramani Mahama, the party leadership together with the running mate, Prof. Naana Jane Opoku Agyemang were entreated to cast their hopes in the Lord and hope for the better.

Apost. Gen. Korankye Ankrah prayed that their quest for victory be answered as far as it is God’s will. He commended them for making it a habit in seeking God’s blessing anytime there’s is elections.

“And if they are here today, may God answer their prayer and grant their petition.”

But he quickly added that; “that whatever the outcomes are you will accept the will of God and that of the people.”

“Prepare for it, whatever the outcome” he added.

Sam Korankye Ankrah vouched that John Mahama is not desperate for the Presidency as claimed by the opposition party. He said that Mr. Mahama is only interested in serving the people, should God grant him an opportunity.

Though John Mahama was indisposed for the thanksgiving, Apost. Korankye Ankrah trusted the message with Prof Naana Jane Opoku Agyemang and the Chairman of the NDC, Samuel Ofosu Ampofo, to be delivered not only tot he flagbearer but to the party supporters.

Sarkodie is Not the Only Artiste Who Has Gone To BETs;...

Meghan Markle and Harry leave fans ‘heartbroken’ as they ‘step back’...

Xbox One to launch in China this month after all