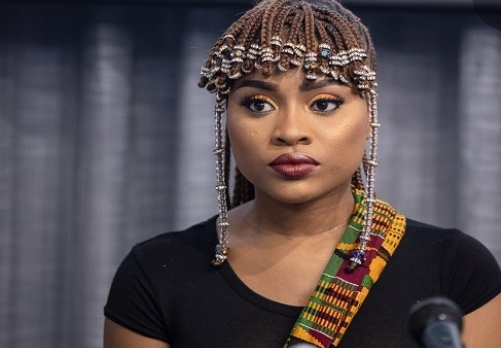 Ghanaian songstress and one of the judges of ongoing TV reality show ‘TV3 Mentor Reloaded’, Adina  ‘mispronounced’ a word while judging one of the contestants during the live show this Sunday.

Adina while sharing her remarks on one of the contestant’s performances ‘gbaa-blasted’ in the process.

The ‘too late’ crooner who was super impressed with rapper Chichiz’ performance in heaping praises on the contestant mispronounced ‘scoring’.

In the live program organised, Adina could be heard saying ‘scoling’ instead of ‘scoring’ which got the audience and colleague judges talking.

Watch the video below:

Contestants on the night exhibited their vocal prowess and showmanship on the TV3′ Mentor reloaded stage.

9 contestants are left in the competition following the eviction of Dufie and Taabea from the reality show today.

Mentor Reloaded airs on TV3 every Sunday at 8:00 pm and is also live on all social media platforms of the station.

Thomas Partey is underrated because he is neither an English nor...

‘Shatta Wale Begged Me To Sign Him Because He Was Suffering...